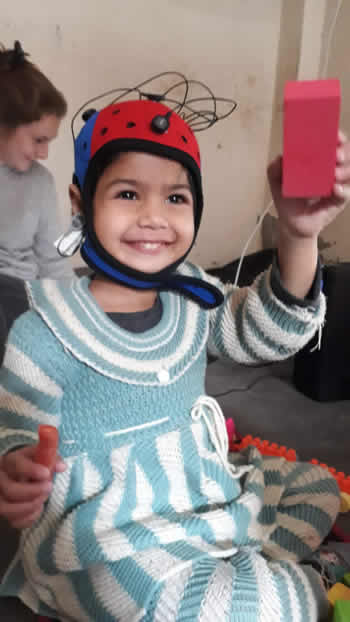 Braintools is a global project which aims to develop a ‘toolkit’ for measuring brain development in locations all over the world.

While children’s brain development can be altered by common risk factors from pregnancy onwards, diagnosable symptoms of common mental health conditions often do not become apparent until mid-childhood.  However, studies in high-income countries have indicated that differences in brain functioning can be observed much earlier than behavioural differences can.  In fact, cognitive signals associated with developmental disorders such as autism spectrum disorder have been identified, and associated with symptoms of autism at the trait level.

The aim of the Braintools project is to develop a method of measuring such cognitive markers of brain development that is optimised for low-income settings such as in India and The Gambia. The hope is that this method could then be used in large-scale projects to detect early risks of under-development and to develop early interventions for this.

Contact us on 0207 079 0761
or email at babylab@bbk.ac.uk
Find us:
Centre for Brain and Cognitive Psychology
Henry Wellcome Building
School of Psychology
London
WC1E 7HX
PDF Map

This website uses cookies to improve your experience while you navigate through the website. Out of these, the cookies that are categorized as necessary are stored on your browser as they are essential for the working of basic functionalities of the website. We also use third-party cookies that help us analyze and understand how you use this website. These cookies will be stored in your browser only with your consent. You also have the option to opt-out of these cookies. But opting out of some of these cookies may affect your browsing experience.
Necessary Always Enabled

Any cookies that may not be particularly necessary for the website to function and is used specifically to collect user personal data via analytics, ads, other embedded contents are termed as non-necessary cookies. It is mandatory to procure user consent prior to running these cookies on your website.